Is LPG in an expensive car a profanation?

Although nowadays LPG is a safe, economical and ecological alternative to gasoline, some drivers are still convinced that it is only suitable for cheap and old vehicles. Is LPG in expensive cars a profanation? Is it possible to reconcile being the so-called petrolhead, that is, a self-respecting car enthusiast and having autogas installations? We invite you to the confrontation.

Disputes such as ‘LPG is for the poor‘, ‘Gas is only for cookers‘ – seem to be slowly becoming a legend, but the topic of LPG installation in powerful and expensive cars evokes considerable emotions. Why does this topic ignite online discussions and divide many drivers?

A large proportion of people say that being an avid car fan and driving on autogas are mutually exclusive. Let us end this nonsense, especially when LPG begins to play an important role in European regulations, as a modern and ecological fuel (e.g. the act on electromobility and alternative fuels and Clean Transport Zones), thus confirming its position in everyday motorization.

For starters: Ford Mustang or Ford Focus? [Answer at the end]

It doesn’t matter which side of the dispute you are on. Let’s start with a simple choice:

Which car would you prefer to drive: Ford Mustang 5.0 V8 or maybe Ford Focus 1.6? Choose a car and we drive on.

Why such a bad opinion about the LPG installation?

Most of the people who complain about gas have had the opportunity to drive only cars with old (already archaic) type installations, most often unregulated, with tangled cables under the hood. Then, there could actually be problems with the engine’s operation, explosions in the manifold, unsightly assembly or a filler in the bumper. Old generations also had a tendency to emit a specific unpleasant smell, mainly when the engine is not warmed up. And this is how the most popular superstitions that we encounter today were formed.

Another group are drivers who gave their cars into the wrong hands. Unfortunately, most of the faults affecting cars with autogas installation are caused by incorrect installation / selection of parts. There are many advertisements for used LPG installations on the web (horror of horrors!) or installation assembly services at very bargain prices. What can we get in return? The set does not fit our car, poor quality components, sloppy assembly, no warranty and others. Saving money at the installation stage can bring dire consequences. Before choosing a workshop, let’s do an independent environmental interview or use the list of recommended workshops.

Where else can there be installation problems? Out of carelessness. The rule is simple – keep your car in good condition, no matter if you are considering assembly or already driving on LPG. Before assembly, the car should be fully operational, and after assembly – properly and regularly serviced. It is also important to refuel gas at secondary stations. The lower price usually goes hand in hand with the poorer quality of LPG (fuel purity), which results in faster clogging of the gas filters.

“LPG destroys the engine,” someone said once, a long time ago

Older generations of LPG actually had a negative impact on the engine, and were able to destroy it effectively. As The LPG dosing system used in them was very primitive, difficult to regulate, and a lean mixture was often burned. Drivers who remember the era of carburetor engines, where you could “tighten” the amount of fuel dosed by the carburetor with a screw, probably know the saying that the engine will burn either fuel or valves. What exactly was that about?

These screws, which everyone turned according to their wishes, and with certain ailments (eg weak spark, worn reducer), could “shoot” and break the intake manifold. First of all, the LPG system was able to destroy the cylinder head (valve seats) when the engine was running on a lean mixture. How? The temperature in the combustion chamber, with the engine working properly, usually does not exceed 800 ° C. When burning a lean mixture, it can increase to over 1200°C – valve seats are unlikely to withstand this, because they are simply not designed for it. Fortunately – such installations are history.

The situation is quite different with the currently used sequencing LPG systems. Here, the control of LPG dosing is much more precise. There is no fear of increased engine wear. If the installation is properly adjusted, the engine does not even “feel” what fuel it is running on, and it’s not forced to make special adjustments (actions), depending on the type of fuel it is running on. In the case of a modern and efficient sequential LPG installation, driving on a lean mixture is practically impossible.

Let’s summarize once and for all – problematic LPG is a thing of the past. Modern autogas installations are a completely different level.

Why is it worth installing a LPG system in an expensive car?

Gas installation contributes to generating significant savings. Hence the popularity of the stereotype that it is intended only for drivers whose budget does not allow them to buy a good-quality car. However, this belief is false and absurd – LPG is a fuel for economical people who manage their expenses wisely.

Some argue that buying an expensive vehicle obliges the owner to run expensive. Overpaying for gas, however, has nothing to do with the value of the car itself. Many owners of expensive cars decide to install LPG because the gasoline engine uses too much fuel. Just browse the aftermarket and check the prices of luxury cars converted to gas to see that LPG does not reduce the prestige of the vehicle in any way.

Celebrities also use this solution. We encourage you to read the interview with Mariusz Pudzianowski. What does he think about autogas and how does he rate driving on LPG in his 6-liter Hummer? 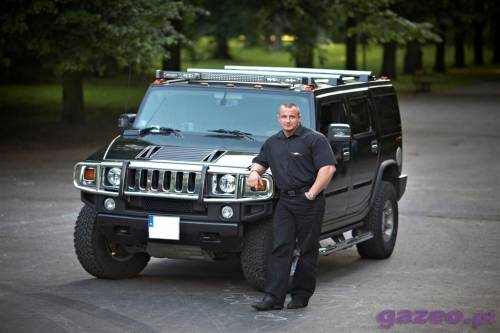 Mariusz Pudzianowski about his Hummer 6.0 350KM with an LPG system installed: “Those who think that gas is for the poor are snobs. After all, if there is no difference in driving, and the installation does not have a bad effect on the engine, why not do it? Because I can count. When I drive slowly on gas, the Hummer burns 30 liters for “a hundred”, which is about 140 zlotys. Gas burns a little over 30 liters, so for the same route I pay almost half as much. The bill is simple. Hummer or any other car. I don’t see any reason for someone to decide how much fuel I have to pay for me. It’s my business, because I have money left in my pocket. Ordinary people don’t make a sensation out of it.” (source: gazeo.pl)

“I don’t want to lose my power” – who said you would lose?

Opponents of autogas systems in expensive cars often argue that the engine powered by it will not be able to develop its full power. This may have been true of the old carburetor installations. Today, however, technologically advanced 4th generation installations (ALEX OPTIMA and ALEX IDEA) are used, using modern sequential gas injection. As a result, the car has the same performance and parameters as when using traditional fuels.

“What about the appearance?” – You won’t even know

The hallmark of luxury cars is the distinctive appearance of individual models. Hence, there is another argument against their conversion, according to which LPG may contribute to lowering the visual appeal of the vehicle. Let’s check.

The tank is hidden in the place of the spare wheel or hung under the car. Properly mounted installation after opening the mask is difficult to notice, aesthetically placed in nooks and crannies. The gas inlet is mounted under the petrol filler flap. The petrol / gas switch can also look attractive – especially if we choose the RGB control unit equipped with aesthetic colored LEDs. The color of their lighting can be adapted to the lighting of the cockpit, thanks to which the interior of the vehicle will seem even more modern. However, if you do not want to display it, the switch can even be placed in the glove compartment. Then we will not really realize that we are driving with an autogas installation …

Did you know that driving a 100 km distance in a 5-liter Mustang with a 420KM V8 engine with LPG installation can cost the same as driving a Ford Focus 1.6 100KM without LPG? The choice is yours – which Ford would you prefer to drive? 😉 The answer is probably obvious. OK, however, if you prefer smaller cars (which we also understand), imagine that at the end of the month you find a few extra “hundred” in your wallet, and driving the Gdańsk-Krakow route costs you PLN 120 (Opel Corsa 1.4 90KM + LPG). As you can see – this is not a utopia, but the real benefits of driving on autogas.

Listening to the opinions of the automotive community, you may be tempted to say that driving on gas is the most harmful to … those that do not run on gas. And yet all our passion for the automotive industry is about the experience behind the wheel, not which gun you refuel with.

Yes, you can love cars and refuel with LPG.

A properly installed LPG installation does not spoil the experience of communing with interesting cars, and thanks to considerable savings, it allows owners to spend more on new parts, or simply driving their beloved super-car more often, and maybe even driving a European roadtip. We, petrolheads and fans of V8 sounds wrote it :-). 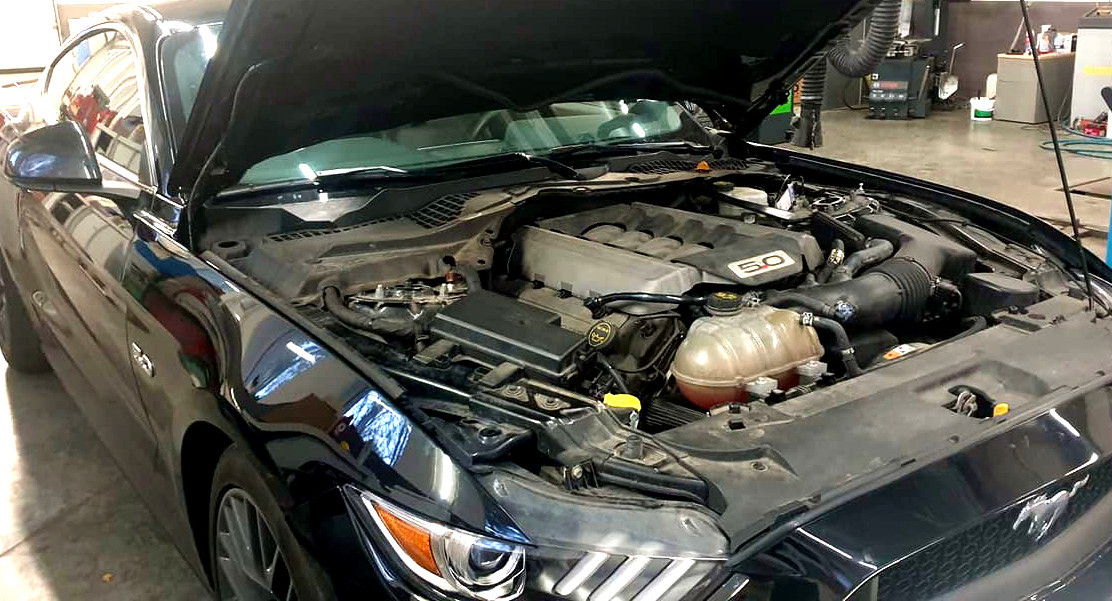 ALEX OPTIMA LPG System installation in this Ford Mustang with a 5.0 engine with a power of 450KM 2015. Assuming the average monthly mileage of 2,000 km, the installation will pay for itself in just 6 months, and the customer will save PLN 1012 per month, PLN 12 144 per year, and as much as PLN 60 720 over the next five years. The installation was installed in the ALEX Company Workshop, and its cost was PLN 5,400 (to handle such a high engine power, installation of two gas reducers is required – hence the higher price).